Clinical History: A 59 year-old woman complains of chronic low back pain and bilateral foot paresthesias. Her knee and ankle reflexes are brisk. On further questioning, she relates a history of stress incontinence diagnosed by her family physician. (1a,1b) T1 and T2-weighted sagittals and a (1c) T1-weighted axial image are provided. What are the findings? What is the diagnosis?

Fibrolipoma of the filum terminale.

A tethered spinal cord due to a tight filum terminale is a well known entity which has been studied and reported for years 1, 2, 3, 4, 5, 6. Previously, it was simpler to conceptualize the tethered cord as an abnormally caudally positioned conus medullaris, which particularly in children with congenital tethering, was responsive to surgical untethering . This has been referred to as tethered spinal cord syndrome (TCS). It has become increasingly recognized that TCS may occur with a normal position of the conus and manifest acutely in adults, and is variably described as tethered cord-tight filum syndrome, occult tethered cord, and normal conus- tight filum syndrome 7, 8, 9, 10.

Up until the eighth week of gestation the spinal cord terminates at the distal end of the thecal sac. Due to a process of retrogressive differentiation and canalization within this caudal cell mass, the filum terminale forms. The filum is a long thin fibrous band which extends from the tip of the conus where it is intradural, to the first coccygeal segment, where it is extradural. However, on imaging it is usually imperceptible caudal to the termination of the thecal sac. Rapid development of the vertebral bodies relative to the cord and this neural retrogression are responsible for the position of the cord within the canal as embryogenesis proceeds. The conus does not change position substantially after birth and can be observed on imaging to terminate above the L2-3 disc level in 98% of patients 11, 12.

The thickness of the filum varies, decreasing in diameter caudally. Most often a measurement of less than 2mm is given as normal transverse diameter. However this measurement should be considered at the midpoint, as the normal filum at L5-S1 is much smaller and perhaps less than 1mm 11, 13. The presence of fat surrounded by fluid will create a chemical shift artifact on most MR imaging sequences. When measuring the fibrolipoma on MR, care should be taken to avoid this boundary misregistration.

Fatty infiltration of the filum terminale is a generic term which implies a fibrolipoma within this structure histologically, which theoretically develops during the latter stage of canalization and differentiation. A lipoma is a mass- like lesion which may or may not be associated with a tethered cord. The differentiation of a “terminal lipoma”, which is a fatty mass at the end of the thecal sac and causes a cord tether, depends on the shape and size of the lesion. A fibrolipoma “infiltrates” the filum and tends to be tubular. These two entities may appear somewhat similar on imaging but are separated in pathogenesis as they are caused by different disruptions in embryogenesis. A fibrolipoma is an error in development of the caudal cell mass. An intradural lipoma is caused by an error in neurulation where a small bit of mesenchyme passes into the central canal before the neural folds close (premature dysjunction).

Fatty infiltration of the filum has been reported in 6% of autopsy specimens 14 and therefore if found incidentally on MR is usually considered a normal variation when the filum is not enlarged and the conus is in normal position. In such cases, enlargement of the filum may serve as a surrogate marker for loss of elasticity or foreshortening of the filum. It is postulated that although the conus may be in a position which is within normal range, the conus would have been more cranially positioned if not for the traction of a tight filum 15. This theory is anecdotally supported by cases where signs and symptoms of a tethered cord and a conus in normal position have responded favorably to filum transection 5, 6, 7, 15. This dilemma is particularly pertinent in children with incontinence and a possible neurogenic bladder 15, 16. Many surgeons would pursue evaluation of urodynamic function as part of the workup in an adult patient with an enlarged fibrolipoma and normally positioned conus on MR.

Controversy exists as to the significance of a small fibrolipoma of the filum without a previously identified anatomic abnormality, given that symptoms of a tethered cord may occur at any age and symptoms can be variable. The imaging findings may or may not correlate with cutaneous stigmata of spinal dysraphism. Warder 7 demonstrated osseous abnormalities in 100% of patient’s in their series but this has not been supported by others. In adults, symptoms may begin after trauma, strenuous physical activity and repeated stretching movements, which theoretically becomes more likely with aging as the conus loses elasticity. Lee reported on a series of adult surgically managed patients (17-72 years old) with tethered cord. A subset of 29 of 60 presented without a prior history of spinal dysraphism or cord surgery. Signs and symptoms included back pain, leg pain, weakness, altered sensation and/or bladder dysfunction and a normal position of the conus 10. The table below (Table 1) highlights the good clinical outcome associated with surgical transection of the filum in his series. 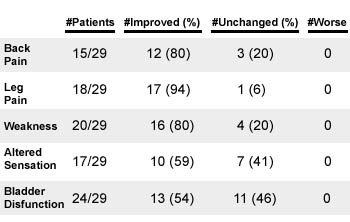 Many other adult series have been reported. Outcomes were similar to Lee’s in some 8, 9,17. Rajpal, however, reported only 65% improvement in back pain and 47% improvement in lower extremity weakness in his series 18.

It is important to note that adults with TCS present differently than children. The majority of adults present with back pain, while children do not. Foot deformities and progressive spinal deformity are rare in adults. Adults tend to present with leg weakness; children with gait disturbances. Urologic symptoms in adults reflect more often frequency and urgency and stress incontinence, whereas children present with a continuous urinary dribbling and delayed toilet training 1, 19.

The following cases are examples of adult patients with a previously unrecognized tethered spinal cord.

Case 3: A 53 year old woman presents with non-dermatomal right leg pain. After the MR was concluded, cystometrics were performed and were compatible with detrusor hyperreflexia.

CASE 4: A 30 year old female complains of chronic low back pain. Reflexes and motor exam are normal. She volunteers that she always felt her legs were “weak” and that her twin sister seemed better at sports and “quicker to the ball.”

Fibrolipomas of the filum terminale are a commonly seen lesion, and are often incidental findings on MR imaging. However, these lesions are now recognized as potential markers for cord tethering and the tight filum syndrome, even in cases in which the conus appears normally positioned. Careful correlation with patient signs and symptoms is thus necessary in patients with this finding, such that appropriate further testing can be performed as clinically warranted.

13 Pinto FCG, Fontes RBV. Anatomic Study of the Filum Terminale and Its Correlations with the Tethered Cord Syndrome Neurosurg 2002; 51: 725-730.

More on this topic

Ready to see ProtonPACS for yourself? Our demo is free with no obligations.