Clinical History: A 30 year old male with shoulder pain and instability. Fat-suppressed (1a) axial proton density and (1b) T2-weighted oblique coronal images are provided. What are the findings? What is your diagnosis?

An ALPSA lesion is an anterior labroligamentous periosteal sleeve avulsion. ALPSA is a variation of the Bankart lesion where the anterior inferior labrum is torn and the labrum, inferior glenohumeral ligament and intact scapular periosteum are stripped and displaced medially on the glenoid neck. 1, 2

The glenohumeral joint is a synovial-lined ball-in-socket joint that has the greatest range of motion of any joint in the human body. The glenohumeral joint is the most commonly dislocated joint, attributed to the much larger articular surface area of the humeral head and the smaller, shallow glenoid fossa.3,4,5 The glenoid labrum is a fibrocartilaginous cuff surrounding the glenoid fossa. The labrum deepens the fossa and increases the articular surface area of the glenoid. The osseous rim of the glenoid and the fibrocartilaginous labrum are sites of attachment for the glenohumeral ligaments and long head biceps tendon, which can be injured individually or in tandem.

The glenohumeral ligaments (inferior, middle, and superior) are thickened bands of the joint capsule that extend from the inferior and anterior glenoid and glenoid labrum, to the anatomic neck region of the humerus, protecting against extreme range of motion.

The middle glenohumeral ligament (MGHL) (7a) is the most variable of the glenohumeral ligaments. It varies in thickness and is associated with labroligamentous anatomic variations such as in the Buford complex. The MGHL can share a common origin with the superior glenohumeral ligament, can be absent in approximately one tenth to one third of shoulders, and functions to help stabilize the shoulder anteriorly from 0-45 degrees of abduction and external rotation. 5,7,20

For localization purposes, the labrum is divided into four zones, six zones, or according to the location on a clock face (9a). The four zones are superior, anterior, inferior, and posterior. Further subdivision of the labrum into six zones includes: superior, anterosuperior, anteroinferior, inferior, posteroinferior, and posterosuperior. By convention, when utilizing the clock face, the mid superior labrum is denoted as 12 o’clock and the mid inferior labrum as 6 o’clock. There is controversy regarding 3 o’clock and 9 o’clock, as radiologists tend to classify the anterior labrum as 3 o’clock regardless of side, whereas some of the orthopaedic literature assumes 3 o’clock as anterior at the right shoulder but posterior at the left shoulder. For this reason, we favor utilizing a descriptive method of localization, utilizing zones and the use of equator as a designation of the mid anterior or posterior labrum.

The normal labrum (10a,11a) demonstrates low signal intensity on all pulse sequences, due to the lack of mobile protons in this dense fibrocartilage. On cross sectional imaging, the normal labrum is most commonly triangular, but can also be round, cleaved, notched, flat, or absent.12,19

MRI diagnosis of labral tears is based on abnormalities in the signal intensity, morphology, and location (displacement) of the labrum. The labrum may be frayed, crushed, avulsed, or torn. Tears are classified by morphology, displaced or nondisplaced, and by location. Labral tears can extend into the biceps anchor as well as the glenohumeral ligaments. MRI criteria for diagnosing labral tears include surface irregularity, increased signal within the substance of the labrum that extends to the labral surface (12a), fluid or contrast imbibed into the substance of the labrum (13a), and labral avulsions. Secondary signs of labral tears include paralabral cysts (14a), periosteal stripping and tearing, labral associated bone injuries such as Hill Sachs and Osseous Bankart lesions, and hyaline cartilage injuries such as the GLAD lesion.

A Perthes lesion (17a) is a variant of the Bankart, where the anterioinferior labrum is avulsed from the glenoid and the scapular periosteum remains intact but is stripped medially. The GLAD lesion (20a) refers to glenolabral articular disruption, which involves a tear of the anterior inferior labrum with an associated glenoid chondral defect.

SLAP (21a,22a,23a,24a) is an acronym for superior labral tears, that propagate anterior and posterior in reference to the biceps anchor. Originally, SLAP lesions were classified by Snyder et al, based on arthroscopic evaluation.13 Additional categories of SLAP tears were described by Maffet et al , Morgan et al , Resnick and Beltran.14,15,16 Although the classification of SLAP tears is useful in terms of prognosis and treatment, a careful description of the type and location of labral tear can provide equivalent information. 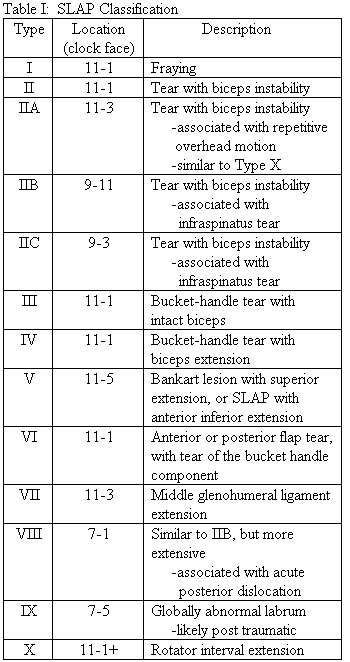 Labroligamentous anatomic variants can mimic pathology, but their appearance and typical location can aid in making the correct diagnosis. Labral variations most commonly ocurr anterosuperiorly, at the 11 o’clock to 3 o’clock position. The sublabral recess (25a) or sulcus is seen at the 11 o’clock to 1 o’clock position, at the junction of the biceps labral complex, but it does not extend posterior to the biceps anchor. The sublabral recess is differentiated from a labral tear by the specific location, the smooth margin, and the fact that it follows the contour of the glenoid. Sublabral recess occurrence increases with increasing patient age, suggesting that sublabral recesses are an age dependant degenerative phenomenon.17

A sublabral hole, or foramen (26a), occurs between the anterosuperior labrum and the adjacent glenoid cartilage at the 12 o’clock to 3 o’clock position. It occurs most commonly at the 2 o’clock position, and in patients with a “pear shaped” glenoid.

The Buford complex (27a) is an anatomic variant that is seen anterosuperiorly, when the anterosuperior portion of the labrum is absent and the middle glenohumeral ligament is thick and cordlike.18

Shoulder pain and instability are common orthopedic problems. Although there are many causes of shoulder pain and instability (including fractures and rotator cuff tears), injuries to the glenohumeral ligaments, labrum, and biceps labral complex are often the cause. Its high spatial resolution, excellent image contrast, and multiplanar capabilities make MRI an excellent tool in the evaluation of the labrum. MR allows accurate depiction of the size and location of labral tears and their associated capsular and glenohumeral ligament injuries. Normal variants that can mimic pathology are also well depicted on MR imaging.

More on this topic

Ready to see ProtonPACS for yourself? Our demo is free with no obligations.